The beginning of my Photography domain.

With producing a part installation piece as part of my FMP, I wanted to be able to experience a similar exhibition. So I was able to gain a feel of the experience and see how it was possible to create a particular atmosphere.

I was fortunate enough to experience an exhibition in the early stages of development of my own.
It was entitled, ‘Bark and Butterflies’ which was created in a collaboration from Adrian Palka and Wolfram Spyra. It was an audio and visual installation, that included; films and poetry with the combination of pieces of bark that was found in the Siberian Rainforest.

They were inspired to create this project after a trip to Siberia in July 2013. To which the followed the footsteps of a family that was around during the war, that lived in a derelict labour camp deep in the Siberian forest.

The installation piece itself is set to symbolise and commemorate the suffering these people had, and also the resourcefulness of this past generation exiles that suffered in these Russia labour camps. With also seeking to within contrast to the subject, portray the beauty that is the Siberian landscape.

The title ‘Bark and Butterflies’, was chosen in reference to the needing of the bark and butterflies the exiles had to resort in eating, in order to survive.

The piece was set up in the Allan Barry building within the University, so it was easily accessible for me to go and see. It was an almost shed looking structure, that was all made from the wood from the Rainforest, and built by the two who created the concept of the piece. 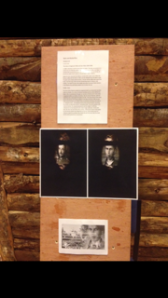 You then had to walk inside the ‘shed structure’ in order to view the actual installation part of the piece itself. This was a collaboration of pictures and moving images, that were projected onto bark in front of you, with an array of mobbing butterflies. There was also sound, poetry, that was voiced in many languages. 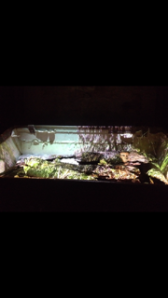 I felt somewhat inspired by this piece I had observed, being that once you step in and witnessed the imagery along with the sound, you became a part of it, you were enclosed within it. By them doing this, I believe it gave me as the observer the feel of what these exiles went through, as it was creating thee environment they lived in, so you gained a sense of what it was like. Although its said that the rainforest was beautiful, and this is reciprocated in the installation piece, the poetry reflects on even though there were surrounded by this beautiful rainforest in Siberia they were in fact suffering on account of the war. I feel that the combination of all the elements used in this piece, is really contrasting, its almost as though there were two pieces in one, with the installation showcasing the rainforest and the poetry reflecting on the experiences of how the people suffered.

I am glad that I went to observe this piece, as it helped in the development of my own work. Being that I have also researched other installation artists such as; Bill Viola, with this experience of another really helped me compare and contrast the different ways in which artists build these installation pieces.

With each artist I have researched, I have discovered that one of the most important aspects of their individual pieces is to create an atmosphere and environment for the viewer. I hope to create this in my own work, being with the subject I have chosen with death upon the publics opinions on the subject I need to be clear on all the aspects of my project, if I want to create a particular environment for the piece.

This entry was posted on February 15, 2014 by chelseamaryballaam91 in Final Media Productions.