The beginning of my Photography domain.

Since first embarking on ideas and pathways to which I could take towards my FMP, one of the first that inspired me was the workings of installation art. Over the foregoing weeks I have found there is even more to what meets the eye with installations, in that it can take many forms including; interactive, land art, video, sound, performance and many more. Along with the use of everyday and even natural materials that are mostly chosen for that of a specific reason geared towards to overall representation of the project.

The genre that is considered to be Installations is all about the three-dimensional workings. The term is mostly used when describing interior spaces but there is also works of the exterior, both works are most often what is called ‘site specific’, and the overall design is initially put in place in order to some what transform the perception of the space it’s put in. More than so, installation art pieces are exhibited in museums and galleries, which is where I plan to exhibit mine in a local gallery in Coventry. They can also be held in both public and private places also, which elaborate on the meaning of them being site-specific, and they are either deemed permanent or temporary, given on the stature and place of exhibit.

The logic and sense of installations being site-specific is that they are fundamentally designed specifically to only exist in the space to which they have been created in in the first place, unless they are being exhibited in a gallery of course like my own is planning on being. There are many examples of site-specific installation art all around the world, some examples include; Immersive spaces in Disneyland and New York’s American Museum of Natural History. With other research I have been doing, there are many video artists that include installation of some sort in their work, one that I follow particularly in the planning and research for my FMP is Bill Viola.

There is a history when it comes to Installation Art, it can be said to date back to as late as the 1950s, to which in 1954 a non-Western installation was staged by a group called the Gutai that was held in Japan. This then influenced artists such as Wolf Vostell, who I am currently researching and also installation pioneer Allan Kaprow. Although in the 1970s was when it came to its upmost influence, it pushed the boundaries from just traditional sculptures to that of more diverse and complex pieces. 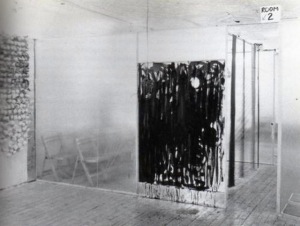 Referring back to that of Allan Kaprow, in the year of 1958 he used the expression of the word environment to explain further the work of installations. As he said the main aim of an installation piece is to ultimately transform a place, whether outdoor or indoor. Installation ultimately takes form of having the ability to create an experience, rather that just having your work like mine in a frame. This is my goal to reach in the outcome of my FMP/Exhibition, I want to take what I’ve learnt and showcase it in a way, through the use of installation to create an experience for my audience and not just something they can look at.

With the use of installation, it can almost create a sort of theatrical form of art. Both the art of installation and theatre hold similar preferences when it comes to giving the audience that sense of an experience. As with the likes of my thoughts to my piece I want my installation piece to capture and immerse the viewer in the experience they will gain from my piece, something they won’t forget. This thought also brings forth the concept of ‘interactive’ installations, which is subcategorised with installation art and has raised in popularity on account of the development of today’s technology. Whether it be through use of; digital, electronic or through sound and sculptures, I want to try and include some sort of use of sense in my finalised piece, so I can withhold more so this sense of experience for the viewer. I had primarily thought about how to do this with reference and developing research  on a number of different things; kinetic sculptures, abstract lighting affects etc. 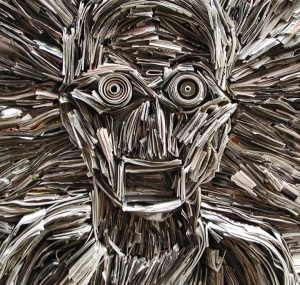 Overall I feel with the use of installation included in my piece, will add a more in depth and stylised piece of work. Rather than me just hanging my work in frames on a wall.

This entry was posted on February 13, 2014 by chelseamaryballaam91 in Final Media Productions.